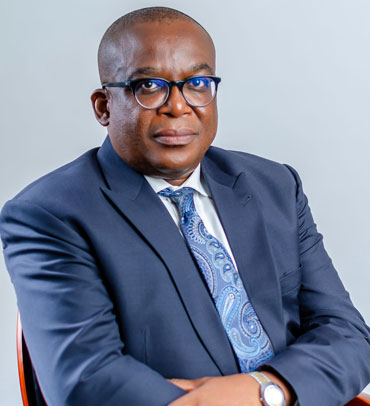 Kenneth is the Managing Counsel of the law firm of Ken Ahia & Associates.

He was called to the Nigerian Bar in 1988 and carried out his National Youth Service Corps in 1988/89 with the
Law Firm of Alenkhe & Alenkhe & Co., Yola, Gongola State (now Adamawa State). After the service year, he was retained by the firm and worked briefly in their Lagos Office before joining Zik Chuka Obi & Co. at Western House, Lagos and had a stint as an in-house Attorney / Head of Legal Unit of Thomas Kingsley Securities Ltd., before establishing the Firm of Ken Ahia & Associates in 1994.

Kenneth C. Ahia, SAN holds an LL.M from the University of Lagos, with specialisation in Secured Credit transaction, Criminal Law and Company Law. He is the Assistant Editor, Law Research and Development Forum Ltd., Publishers of Lawyers Bi-Annual Magazine (a journal of comparative legal issues). He served as an External Examiner to Nigeria Law School, Lagos for some years. He is currently a member of the Legal Practitioners Disciplinary Committee, Lagos. He also served as a member of Local Government Election Petition Tribunal in Abia State, from 2003 to 2005 and was for several years, a Law Reform Commissioner with the Abia State Law Review and Reform Commission. This authority Published the current Laws of Abia State.

His select areas of Interest are Advocacy, Trade Marks, Commercial law, International Franchising, Election Petitions and Capital Markets Issue. Kenneth C Ahia, SAN, is a Notary public of Nigeria and was awarded the distinguished rank of Senior Advocate of Nigeria. This is a privilege accorded to lawyers above ten years post call and who have distinguished themselves in the field of Advocacy. He has appeared in several contentious matters and several Election Petition cases.